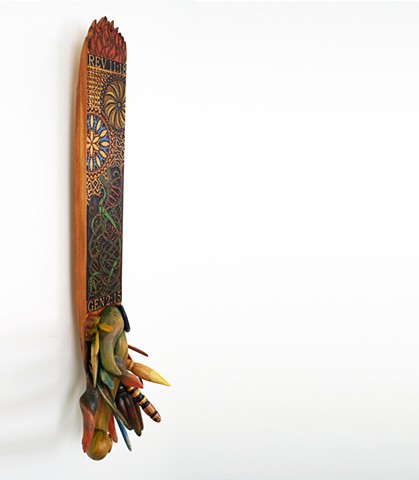 As a household artefact, the mangle board warrants deconstruction for the insights and metaphors it provides regarding expectations of obedience and order in our families and homes— expectations that extend out to whole populations and the environment. With all the pressing needs of daily life, whether in my ancestors’ Scandinavia of 1500-1800 or this week at home in urban Australia, it is hard to imagine any actual, critical need for yards and yards of table linen smacked crisply flat in the time-consuming task of hand-rolling and batting by mangle board.

It is, however, easy to imagine societal constructs that equate domestic efforts towards order and tidiness with moral righteousness. Good women, spending hours cleaning and flattening cloth, would simultaneously be cleansing and ironing their own souls and minds with each stroke, gazing down upon imagery meant to keep the obligations of wives and disciples in focus. While the familiar adage “cleanliness is next to Godliness” was first recorded in a sermon by John Wesley in 1778, the notion goes much further back. In the early 1600’s, Rene Descartes and Francis Bacon shifted the meaning of Genesis from notions around stewardship and caretaking of Eden into man’s obligation to tame, cultivate, harvest, and civilise all that remained wild and natural. The resulting Dominionism presents the universe as clockworks, where linear and rational systems are necessary to groom and train the world. Over the intervening centuries, Dominionism (along with younger brother, Manifest Destiny) justified damaging policies ranging from cultural assimilation and slavery to environmental degradation and escalating rates of extinction. Meanwhile, the workings of natural and indigenous systems, often extremely complex, interdependent, holistic, and entangled, have received little recognition until recently.

Original meanings of Judeo-Christian scripture have been subjected to poor translation. From Genesis to Revelations, instructions to tend to or care for the earth and its beings have been spun into a mandate to pillage and squander nature’s bounty. In this work, “Interpretations Pending”, the mangle board ‘handle’ is an entwined, lush bouquet of root and vine-like forms made from reclaimed furniture parts. This sits below Genesis 2:15, simultaneously referencing Eden and a return to Eden. The imagery climbing up the mangle board is drawn from the carved wooden doors of the Urnes Stave Church, the oldest wooden church in Norway (1130 AD). The serpent/vine imagery is noteworthy in bridging the Viking style of animal ornamentation and the rise of Christianity. Above this, a background pattern of scattered, irregular shapes become organised into a grid of increasingly geometric shapes. Towards the top, high order is achieved in rosette carvings drawn from an actual Danish mangle board c. 1860. As order peaks, Revelations 11:18 is crowned by the burst of flames and the end of the world.