Portfolio > Theory of Everything 2015 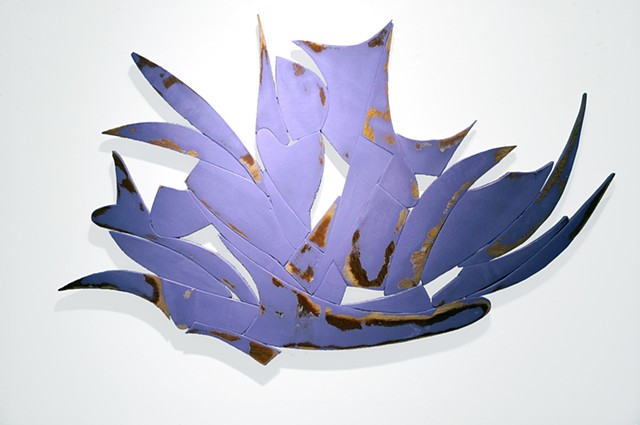 This body of work was conceived and created during a residency at Chiang Mai University in late 2014/ early 2015. I intended to work with salvage timber materials, but found that in Thailand, people are not so cavalier about tossing out their furniture, etc.

I did, however, have access to a heap of plywood offcuts in the wood workshop of the design program. The offcuts were generally "unusable"—just curved bits and corners. I laid them all out on the workshop floor, where they resembled the pieces of a giant puzzle. Naturally, I started on seeing if any pieces fit together.

Naturally? Why is that the impulse, or the assumption? The expectation, or hope, is that all parts actually should fit together into a whole—an all-encompassing solution of perfect logic and rationale. We do tend to like answers where no piece is left out of place. In mathematics, the elegant formula is one that delivers the maximum effect in the simplest way with no messy, dangling unaccounted for remnants. In particle physics, String Theory postulated that all matter in the universe could be broken down further than point-particles into a single type of one-dimensional units: strings. The Unified Theory, or General Theory of Everything emerged, proposing " a hypothetical single, all-encompassing, coherent theoretical framework of physics that fully explains and links together all physical aspects of the universe". * Finding a Theory of Everything has been one of the great unanswered problems in physics for centuries— it drives theoretical physicists nuts that there is not just a single solution that can explain everything with no exceptions.

But why? Why does our logic tell us this makes any sense? Why would everything in the entire universe is made of one granular unit and always follows the same set of rules? While this rationale can be traced back to ancient Greek philosophers, the main root can be summarised in three words: Age of Reason. This seems more to reflect our human need for logic, order, and a tidy explanation of a complex, dynamic, and chaotic world.

Following on Theory of Everything logic, I decided to accept that since I found all of the odd scraps of plywood offcuts in one workshop, they must all fit together as one thing. I pretended the pieces must form one puzzle, and that as a puzzle, all the pieces must actually fit together.

I did not substantially alter any piece, but used all shapes as found. In the end, I assembled two pieces. The works I formed seemed to aggregate spontaneously, like surrealist doodles, but on reflection, both works strongly reference the pervasive imagery of my surroundings in Chiang Mai, Thailand. As the pieces of scrap ply nestled and interlocked, the forms began to suggest recognizable local icons, and the associations solidified as the pieces were built in a process reflecting both growth and construction.

Theory of Everything: Growing Architecture is reminiscent of the hundreds of temples in Chiang Mai, and their typical colours: Deep red with gold.

Theory of Everything: Constructing Nature is reminiscent of the quintessential Thai/ Buddhist flower, the Lotus Blossom. The entire campus of Chiang Mai University was surrounded by a perimeter fence painted lilac.